Here in New York City as in the rest of the country we have a problem with the elected political establishment not being responsive to the will of the citizen voter. One of the most important reasons is that elected politicians have an incumbent re-election rate of 90% or more. In many cases, we give electeds a virtual lifetime appointment to office no matter how they behave in office. Then worse, when the elected either retires or dies in office, we vote for another member of their family making an entrenched political dynasty.

Call it "the great guy syndrome". If one were to ask their neighbors' opinion on politics they would invariably say that all politicians are crooks, incompetents or in the pockets of their donors and would express amazement that people in other districts or states are such idiots to vote the wretches back into office. All the wretches except their politicians because their politician is a great guy and they can't wait to vote him (her or it) back into office.

What the great guy voter never realizes that all the other people he views as idiots who keep re-electing losers to office also think their politician is a great guy and can't understand what's wrong with everyone else as well. So we end up with re-election rates of 90% or more and nobody can ever figure out why nothing changes.

The great guy syndrome also causes voters to treat their electeds like rock stars because they're great guys rather than employees hired by the people of the district or the state to represent the community and it's interests.

Really, the important thing to remember is the people are the boss and elected politicians are our employees, hired by us in elections, and whose paycheck comes from our tax dollars. (H/T Mitch Waxman)

The problem with this current situation is that an entrenched politician with a virtual lifetime sinecure, like any employee the boss does not watch over, will begin to slack off of his responsibilities. If the employee realizes the boss will never fire him, he will lose any and all respect for his boss who he will then take every advantage of and virtually rob blind.

What should be done is for we the people to grow some backbone, take charge, and act like the boss.

Watch over your elected employee and hold him accountable if he fails to represent your interests or follow through on campaign promises. If he doesn't work up to standards, vote him out no matter how much you personally like him or his party affiliation, the platitudes or ideology. Vote for a candidate of another party if necessary to send a message to your preferred party and let them know why. Better luck then to the next candidate. No excuses.

Limit electing any candidate for office to two terms only! Maybe he is a great guy working miracles for your district so let him run for another office and be a great guy there. Don't let them sit in one office too long becoming indolent and disrespectful of the constituents.

It can be done.

Somewhere in downtown Brooklyn past

Where this was is a bit of a mystery. It's somewhere in the downtown Brooklyn end of the #12 Dekalb Ave. line. Nothing along Court St... 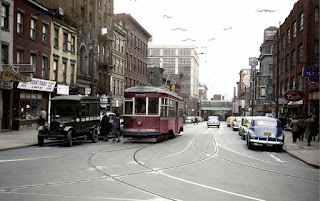