From: "agriculturally challenged" posted on the Newtown Pentacle 12/03/2019

Let's cut to the chase: No matter how loud anyone yells about the Sunnyside yards project, no matter what rinky-dink cabal of local...uh make that midwestern soy-fed imported fake-local asshole leftist group holds yet another dreary meeting to honk and quack about it, this project will happen come hell or high water. This leviathan was ordained by ruling class powers far higher on a national level than the local yokel minor gentry tasked with its construction. Even up as high as the new emerging trans-national ruling class collective with the full throated approval of our own rulers. So as far as our masters and betters are concerned, we can shove our objections up our collective asses sideways. It's Agenda 21 uber alles, my boy.

Whatever drama opposition groups manages to drum up remains only that- drama, strum und drang, sound and fury signifying nothing. I happen to oppose this Sunnyside Yard project myself but I'm realist enough to understand it will happen because our ruling class wants it to happen and those rulers and their vassal elites neither like us nor care how it affects us. The building rampage throughout this city will continue unabated as it is one of the few industries left that isn't fully tax dollar funded. Without it, our economy will be in hurting shape.

If you don't like it, Mitch, maybe you shouldn't have supported the progressive liberal program and the politicians who planned and will implement this behemoth. Because it is they who screwed you just as I said they would. Just saying.

Sorry for another quickie, been busy. Antique radios don't restore themselves and I've got one hell of a backlog to go through. Anyw... 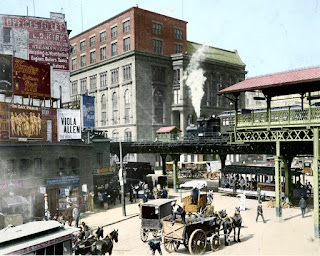