To the Lotus Eaters: Gentlemen, love the Podcast of the Lotus Eaters but in this particular podcast, you're making this far too easy for me to make japes at your expense at this display of mis-placed national pride. Presenting an argument with so many holes in it and with such selective framing and leaving out, at least to you, embarrassing historical details that would negate your entire thesis. To the point of rendering it a farcical display of cope with how your people completely blew your once great empire and are now forced to endure the indignity of living in America's shadow. So much so that perhaps this is just comedy as I did get a few good chuckles over it. But if you're serious, this is nothing less than a pitiful exercise in whining and blaming others for your mistakes. Embarrassing, gentlemen, poor show. So much so, that I'm embarrassed for you. But fear not, for after I've had my druthers in unsealing a tin of whup-ass upon you to let the punishment fit the crime all the while enjoying some innocent merriment at your expense, I shall be magnanimous afterwards because I really do like you guys.

Email ThisBlogThis!Share to TwitterShare to FacebookShare to Pinterest
Labels: cope, History, the British Empire, the podcast of the Lotus Eaters, the UK

Old news now but still humorous. It's been sitting in the draft box for two years so maybe it's time to dust it off and shoo the moths away as it might still have some freshness to it.
There's nothing that can bring a smile to the face of the Caretaker better than to witness the tears and pathetic whining of an old, white Democrat machine politician. Nor can anything make him laugh all the harder than watching his prophesy of the white Dem machine's people of color pets turn on them. They deserve nothing less for their truly weapons-grade stupidity in believing a group of privileged, white progressive liberal politicians can jump out in front of the identity politics parade and lead it themselves. Sow the wind of the white man evil racist and reap the whirlwind of the people of color's revenge.

Snivel and whine you old fool then go through with defunding the police you still hide behind. And if the armed men trusted to guard and protect the local managerial elite some day finally decide not only do they not need those pathetic excuses for the local Ruling Class but they're a liability as well, then those weak and cowardly creatures are on their own and at the mercy of the citizens they so long abused. As well, those formerly seen as mere POC/identity/grievance group pets will also have their druthers.
Do recall what Dante wrote in The Inferno that the inscription above the gates of hell reads "Abandon All Hope Ye Who Enter Here" and that the damned will be forced to enter those gates on their bellies. If this day of reckoning happens within our lifetimes, I won't have any part in this but our Betters and Masters will get the full technicolor Inferno experience and will have deserved it.
However, If I'm still around, I'll be sure to smile and wave to all the heads of white liberals and SJW leftists/DSA freaks mounted on spikes as I walk by.
Donald Cavaioli
at May 26, 2022 No comments:

The Magnificent and Essential Work of Raising Awareness and Profiting from Taxpayer Money in the Process. Results not Necessary! 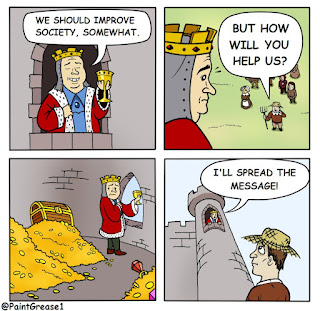 Here's what Our Glorious Leaders of the People's Banana Empire of New York latest Grand Strategy for combatting Climate Change™ and save us from the new Noah's flood that will engulf us in 20 years:

They will spread the word to raise public consciousness about the immanent dangers of climate change and we'll pay for the honor and privilege of it. The danger of climate change and we're at the tipping point of doom only 10 or 20 years away since 1988 and this weird little doomsday cult will pocket our tax dollars to tell you all about it. Yeah, okay.

What does "climate resilience" actually mean especially if we're all doomed anyway? Like all leftist terms, it doesn't really have a meaning, only some emotional connotation of good feels or bad feels. But if it rakes in those sweet bucks, then hell yeah! The best good feels money can buy!

So it can be nothing but the spectral threat of climate change/global warming or whatever the marketing department thinks will sell today. There can be no other explanation.

Nobody will ever consider ground subsidence in the area around Meadow Lake as one reason for flooding. 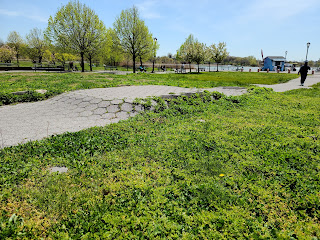 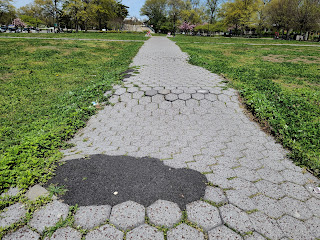 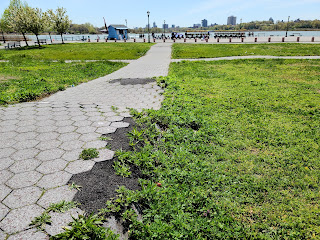 The bumps in the pathways are the remains of the monorail stanchion foundations that were cut about a foot or so below ground level after the 1964-65 World's Fair. Prior to the recent repaving and further grinding down of the monorail footings which took place after the Aquacade was demolished in 1996, those bumps were much higher. Sorry, can't find my old photos of this.

So the ground has subsided quite a bit since the Fair which is not surprising as the area was a marshland. A high water table tends to turn soil into mud which can be washed away. Have our eco-heroes of the Waterfront Alliance considered this? Have any of these parasitical NGO assholes ever actually visited the park and saw the area in question themselves let alone be able to find it without directions from google maps? Nope, it would ruin their business and probably a majority of them are out-of-towners who never even heard of the park until it became profitable for them.

Or how about dredging the Flushing River and lake to clear out sediment buildup, which raises the water level. Sediments from the tides from Long Island Sound as two other now underground streams- Ireland Mill Creek which flows down from Kissena Lake alongside Booth Memorial Avenue, emptying at the Pool of Industry and Horse Brook which flows from Kneeland Avenue in Elmhurst and empties into Flushing River near where Willow Lake is today. Again, that's a big NO. Who ever heard of such rubbish as tributary streams carrying sediments. It's all about global warming 'cause that's where the money is.

The creek and the lake haven't been dredged in decades, for what it's worth.

And did anyone do any maintenance on the tide gate below the Bridge of Flags on Meridian Road from the entrance of the Flushing River into the park? Did our esteemed experts on distant future weather ever think that high tides may lead to a high water table? Oh really! The Experts have read the auspices of their computer models which show that the area will be underwater in about 20 years. The Science! has spoken and those who lack the proper credentials of priestly office may not interject their feeble opinions to their betters. Science! is to be obeyed and followed without question. Pay no attention to the utterly useless non-profit mutants who are lining their pockets with public money behind the curtain.

No need to trifle with such nonsense as ground subsidence and silt build-up because nobody makes money in the long term that way. I mean if you send in a contractor to do the dredging and/or raise the ground level around the lake and sure they make some money, but it's only a one time deal payday and then nothing more. Global warming is the gift that keeps on giving for many years to come (at least for non-profits) if you don't do anything but tell people that global warming is worse than we thought and send them more money.