Sometimes it's nice to escape back to a simpler time. 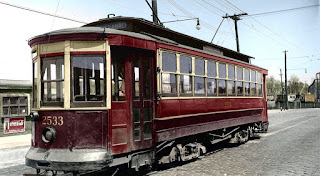 Here is Meeker Avenue on the Brooklyn side of the old Penny Bridge barely visible on the far right. This is probably around 1936 at the latest as with the completion of the Koscuiuszko Bridge, it was demolished. The photographer however, was far more concerned with this Stephenson model 1907 car at the terminal stop of the Meeker Ave line of the B&QT when it was a privately owned railroad company. The end of the track and catenary wires clearly visible on the right.  I like the little green convenience store, if that's what it is, with the coca-cola sign on front. Getting the colors of the Stephenson right was tough because these cars were originally convertible cars- double ended open motorman control and sides can be removed in the summer to permanently a fully closed car, front and rear doors with parts of slightly differing shades of red added.

The original black and white photo was found in the hidden back 'World' menus of NYC Subway.org where the trolley photos are carefully concealed (those ERA types, I tell ya!) and by myself colorized in defiance.