What if they gave a war and nobody came?

Everybody's talking about World War III what with that drone strike against Iranian general, Qasem Soleimani and really, it's all nonsense. It's highly unlikely that Iran is going to declare war on the U.S. over one of their military men who was killed in Iraq and who was there in for the purpose of causing mischief of the terrorist/insurgent type. No war but it will mean a few days or perhaps a couple of weeks of bluster and saber rattling from both Iran and the U.S., sturm und drang theater in the U.N. ending with an angry letter to the Times. At the worst, there'll be some tit-for-tat retaliations in Iranian sponsored terrorist attacks and some more US drone strikes but even they too will taper off after a while.

President Obama was famous for killing people in drone strikes, both big name terrorists and civilian by-standers, including allegedly, a wedding party with not only no talk of war, no questions about civilian deaths, but effusive praise from the official media.

But that was Barry Von Choomwagon our all good, all knowing, divine Unicorn King whose every utterance was an ultragenius professorial dissertation only a handful of mortals had the wit and intellect to comprehend. Not the evil white supremacist Uber Satan, Orange Man bad, aka President Trump.

But to further render this mega World War III, IV, and V all in one drivel all the more ludicrous: Here is a tweet from a local politician, that unsung hero of cringe inducing vapid rhetoric, and REBNY (Real Estate Board of NY) mega fanboy, that most fabulous liar, Jimmy Van Bramer. (please clap) 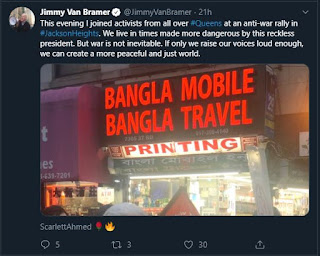 Here Jimmy does the local New York City politician tried and true tactic of braying about an imaginary problem, speechifying whilst posing for a photo-op with some activists non-profit commissars and when World War XXIII and the utter destruction of several universes doesn't happen, declares victory in another round of photo-op dreary speeches. Just like global warming or climate change, emergency, whatever, imaginary problems with real taxpayer money-costing solutions.

This usually occurs around election time for which coincidentally he currently happens to be running for Queens County Borough President. But this is only a coincidence, mind you. He's trying to save the cosmos from nuclear armageddon not to oleaginously  jump on the Duke Nuke 'Em Orange Man Bad bandwagon to whip up support from howling, demented progressives in the throes of Trump Derangement Syndrome.

Yes, this is the very Jimmy who got his jimmies rustled over some posters saying only that illegal aliens should be reported to ICE, who through his own psychic force abilities and through arcane methods of divination and his own special secret decoder ring, knew, he just knew, was written by the white supremacist Satan about Hispanics! Thus his honks and quacks of "racism" banished white satan back into hell and saved all those illegal alien cheap slave labor and human sex toys poor undocumented workers from some kind of fate worse than death. What chivalry! The press release is mightier than the sword or the gun! Total victory in useless hand waving, man!

This, the Pure and Noble Knight, Sir Jimmy of the 3 billion dollar lie who heroically saved New Yorkers from getting jobs with Amazon HQ-2, snatching defeat from the jaws of almost certain victory. Indeed, an indispensable slimy punk who shall raise his voice yet again not only to make each and every one of our streets safe for the 2 or 3 hipster bicyclists with protected bike lanes but shall give us nothing less than world peace. Merely by raising his voice with a gaggle of loser activists. (please clap)

But Brave Sir Jimmy aside and more importantly, all this blather about WW-III on the level of our mainstream media, the scribes of the ruling political and managerial establishment, is meant to deflect attention away from the Democrat's impeachment fiasco in the tactic of shouting "look! atomic squirrel! Orange Man Bad!".

But enough for now. It's not likely that the People's Republic of China or Russia will be going full Dr. Strangelove over the assassination of some Iranian in Iraq to cause problems. There wasn't a war over the USS Vincennes accidently shooting down a Iranian civilian airliner which was an arguably worse event. Besides, Iran already has enough problems with social unrest at home and economic problems to start a war. The PRC and Russia are too busy trying to score a lot of money in their BRICS scam, belt and road loansharking racket, etc. to be bothered. For the Russian oligarchs and high ranking CCP officials, living (really) well is the best revenge.