And now for something completely different: A break from politics and news items. 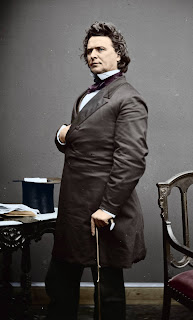 Recoloring 1860's photographs are not easy. The flesh tone is the hardest to get right, something to do with they way the old photo emulsion reacted to blue. Yes the colors in visible light to have some effect on the black and white emulsion which is difficult to compensate for with a colorizing app.

The gent in the photo is James Mitchell Ashley, Republican congressman from Ohio during the Civil War. The sharpness, contrast and gray scale made it a good photo to otherwise recolor. I should work more with CODIJY Pro but I'm just too comfortable with Recolored.

Maybe for another break from the nuisance of current events I should post some stuff on some of the antique radios I'm restoring like the current RCA 9K3 from hell. It'll be beautiful when it's done but for now, one problem after the other after the next.