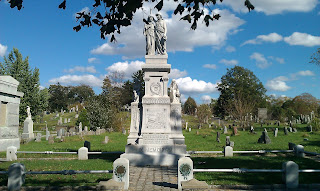 Up until September 11th, 2001, the single worst disaster in New York City history wasn't the Triangle Shirtwaist factory fire as some would say but a fire on a paddle wheel steamer named the General Slocum that claimed just over one thousand lives on June 15th, 1904. It stands as the 12th worst maritime disaster in the world. 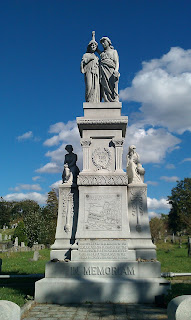 The Slocum was chartered by St. Mark's Evangelical Luthern church on the lower east side of Manhattan with over 1400 passengers for a day trip to a picnic site at Eatons Neck Long Island.
The fire was reported to crewman by a young boy who was not believed and it would be about 10 minutes before the fire was reported to the Slocum's captain, William Van Shaick just as the ship had passed by Hell Gate on the East river. Due to the treacherous currents of Hell Gate and fear of spreading the fire to docks along the Bronx, Captain Van Shaick made the controversial decision to race at full speed to the shallow waters around North Brother Island. 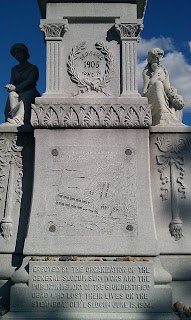 This had the effect of fanning the flames that had started in the lamp room in the ship's bow to aft. In the less than 10 minutes race to beach the ship in the shallows around North Brother Island, the entire ship was engulfed in flames. Surviving passengers managed to jump onto the decks of other boats that had pulled alongside or were pulled from the water by other boats. 1021 people would lose their lives to fire or drowning and 367 people would survive.

It was a sorry story of steamship inspector corruption, a venal ship owner and crew incompetence made worse by rotted life vests and lifeboats wired and painted to the decks that could not be pried loose. Lives lost through gross negligence. 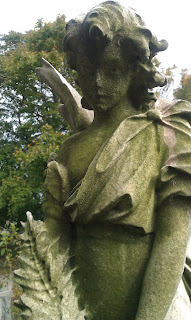 The above photos I took in Lutheran All Faiths cemetery in Middle Village, Queens. This is the memorial where some 30 victims burned beyond recognition and unidentified were laid to rest. As the 115th anniversary of the tragedy nears let us remember those so terribly and unnecessarily lost and may they rest in peace.