So at last count there are 10 draft posts backlogged in the receiving vault in varying states of completion awaiting final form. Why put off until tomorrow that which we may procrastinate on later as the Caretaker is fond of saying.

Some upcoming posts include topics like current events in Hong Kong, a dissection of the Jeffery Epstein murder conspiracy, the relationship between corporations and the managerial state and of course, some fun jabs at the foibles, idiocy and pure silliness of our local political prats. Especially a local grocer-turned politician who in his spare time is not only an electrical engineer, expert on power generation and grids but an epidemiologist who is is in line for a good (figurative) boot up the arse. Not Sandy the Barmaid Ocasio-Cortez and Bill "Kaiser Wilhelm" De blasio. One should refrain from making fun of people with disabilities. Besides, they're boring. But note to the Pointman, Sandy coming in at 5th place in the 2018 Prat Awards was a miscarriage of justice. She should have at least scored in 3rd place not in 5th behind that washed up old hag, Merkel. And if our Sandy doesn't take first by a mile for the 2019 Pratties with the Green New Deal, then that's totally bogus, call foul on the judges and I shall demand the judges forthwith be flogged for being innumerate, blind or simply biased twats. 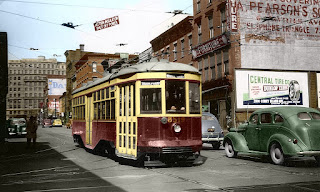 But here just to post something new and different is another of my colorized photos of a Peter Witt car on Myrtle Ave and Adams Ave in Brooklyn, dated 4/22/1947. The original B&W photo was from www.nycsubway.org hidden away under world then around NYC with the other trolley photos.