Badthinkers Beware, Big Brother is Watching! The Squires of New York Have Decreed Certain Race/Ethnicities and Criticism of Illegal Immigration to be Racist and Anti-New York

From The City: ANTI-NEW YORK WHITE SUPREMACIST HATE IS RISING, NYPD SAYS by Greg B. Smith on August 14, 2019

In the latest example of anarcho-tyranny, the NYPD, our glorious guardians of progressive leftist-democracy, the defenders of the People's Banana Republic of New York, although unable to quell real, actual shootings have instead decided to focus on imaginary crimes with a vigor and ferocity they would never dare against real violent criminals. That would be racist, white supremacist and whatever other fill-in-the-blank-o-phobic shaming language is in style today. At least this is the official policy of the NYPD brass, those most servile lap dogs of the progressive leftist establishment desperate to curry favor with their political masters.

The NYPD brass as managerial state apparatchiks know as well as their political masters that imaginary problems are much easier to solve than real problems and with less risk of failure. So when there are mass shootings in Brownsville or East New York, the managerial state whelps whimper whine helplessly but when "White Nationalism" rears it's ugly head in the form of edgy internet posts and memes, no real incidents of white devil violence here in NYC, the gentle lap dog like magic, transforms into the fiercest, snarling cur. 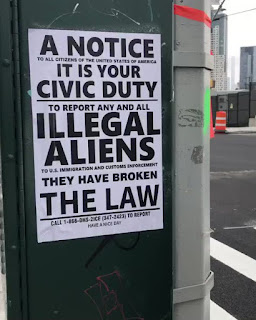 From the above photo anyone thoroughly indoctrinated in liberal emotive newspeak, which is to say any social justice warrior or lying politician here in the People's Banana Empire of New York can easily translate into prog: Reporting illegal aliens with no mention of any particular race or national origin to Immigration and Customs Enforcement causes bad feels, is written by the devil and really means white people hate "people of color" because of reasons. The human trafficking for our cheap labor neo-slave trade must not be questioned let alone stopped. So Something must be done right this instance to put these uppity white proles back in their place by virtually burning a few heretics at the i-stake and throwing a few into jail. How dare the people who posted this flyer question their betters!

So here we are now in our glorious People's Banana Empire planning on arresting people based only on their political or social views because they might be plotting to kill people. Even if there is no threat stated or even slightly implied. Shades of Minority Report sans the psychics and going only on some SJW's hurt feelings. Precautionary principle without a limiting principle spiraling us into the abyss of totalitarianism.

Besides punishment of naturally racist and evil white people, it's a diversion from shootings in the hood the NYPD can't or won't address lest they be called racists. Doing the job a P.O. is called to, even doing it according to the patrol guide and training is no protection from a suspect with high diversity/victim pokemon points dying in custody from health related problems. As police officers on the street get more into trouble based on liberal political criteria for the things they do than the things they don't do, it's better career advice to only enforce minor offenses or political crimes. I can't blame the white shield foot soldiers for taking this tact no matter how wrong and disagreeable I find it.

Then there are the howls of outrage from the usual and expected identity/grievance progressives which are joined by the howls of outrage by libertarians, alt and dissident right types. Although nominally race realists, the people on the right, the people the average cop would assume to give him at least the benefit of the doubt, have a built-in dislike for all law enforcement and will happily join the left in calling for a cop's blood in any controversy. When you have no friends to the left or right or behind you, only devils, then there's no other choice than to go with the devil you know. It's the path of least resistance.

But the real culprits are the political establishment who for ideological reasons refuse to deal with real people who cause real problems either out of fear of being called racist or who have really drank deeply of the equalitarian, tabula rasa kool aid. The police department is a creature of the executive political establishment and as designed reflects the agenda of the mayor. Civilian control of law enforcement or the military through elected mayors, governors and presidents is desirable in a constitutionally limited republic or democratic society as in theory, the people have ultimate control over whom they elect and what policies are enacted. However as the size and scope of bureaucratic government grows into the managerial state, the people as constituents become further isolated from having direct power over the direction of official policy.

Further, as the people, seeking security through less personal responsibility by allowing managerial government to become the nanny state not only loses control over public policy but completely and voluntarily abdicates it to their elected leaders and managerial apparatchiks. Then there comes the politically connected grifters with solutions in search of a problem or big ideas to solve public problems payed for by the tax payers. Some of whom get caught only when they go too far in their skimming or fall out of favor with their political and bureaucratic patrons. Many are not well publicized and operate just below the vision of the public at large.

The police uniformed members of the service at the rank of captain whose promotion to higher rank is by appointment of the mayor will echo the mayors policy. The captains and above as well as the ranks lower can rationalize this unconstitutional and un-American criminalizing of free speech as the people of New York City have elected these people as the mayor and city council, these policies must be what the people who pay their salaries want and they as public servants are obligated to follow. Besides, maybe Phaemon's dog was right after all.

One can only hope that the police officers involved in this ridiculous witch hunt will see how wrong this is and do the "civil servant" thing of cheering it on so as to be seen as being "on the C.O.'s team" while only pretending to carry out directives. Otherwise our constitution will be finally and fully overthrown with the arrest of dissidents as purely political prisoners. Welcome to the future as a third world, one party, totalitarian dictatorship.