Yesterday and Today II: Around the corner 17 years later

Back to yesterday at Seneca Avenue and Dekalb Avenue trolley terminal and Dekalb repair shops in old Queens on the border of Brooklyn for a peek around the corner. 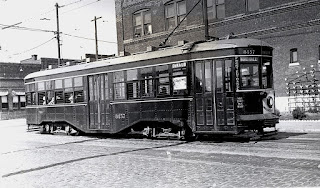 Here is a photo of a Peter Witt car at the Seneca Avenue terminal of the Dekalb Ave line as the photo appears in the collection of NYC Subway.org. The photo is dated September 22, 1935. Yesterday but 17 years later than when that BRT Tauton repair car was parked around the corner on the right.

But let's add some new life into it: 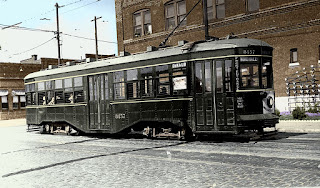 The scene colorized and probably very close to how the people waiting inside the car would have seen this view. The Peter Witt car turned out to be dark green. A bit of a surprise as a pre-1940 NYC Board of Transportation takeover and the light bottle green livery. So I expected it to be in the usual B&QT red livery. But no, the red didn't look right, a bit over saturated and didn't blend naturally with the other colors. Recolored's usual way of saying you picked the wrong color. So the red was removed and the colorize button was clicked and the streetcar uncolored took on a greenish hue. That was it- the color is green.

Turns out after a bit of research that the old Dekalb Ave line was operated in the 1920's and 30's by a BMT/B&QT subsidiary of the Brooklyn City Rail Road (BCRR) whose livery was dark green with yellow trim. So recolored did not steer me wrong. For the flowers I picked a flowery color of lavender because it looked to me what a flower should be colored even if I know nothing of flowers, plants and stuff. I'm more a machine and electronics guy- especially antique and vintage electronics.

So if the ghost of that long dead Peter Witt car and her passengers were to appear to us today in the spot on which she sat on September 22, 1935, she would be blocking the rear parking lot entrance of here: 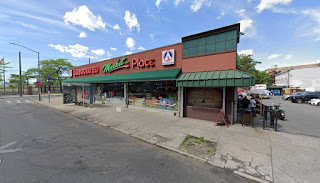 The front of the Peter Witt (on the left in the above recolored photo) would be facing us from the Associated supermarket parking lot (on the right). This photo I clipped from Google Maps I should add. I should make it a point to do my grocery shopping there in the hopes of better prices than Stop n Shop and perhaps to run into one of yesterday's apparitions. I want to ask what color those flowers planted in the 20's and 30's were.

Too bad they didn't keep the old B&QT office building and put the supermarket in it. This might have helped out with having the ghosts hanging around there for me to pester with such banal questions.