From the mausoleum the caretakers wishes one and all a Merry Christmas!

And from the world long dead in black and white, brought digitally back to a color semblance of life: 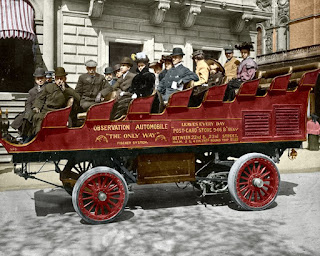 For those who think Tesla EVs are something new and exciting in transportation, think again.
An electric tour bus about to depart on a city sightseeing tour from Broadway and W 23rd Street in 1905. An earlier work of mine that I'd like to re-do, but still acceptable.